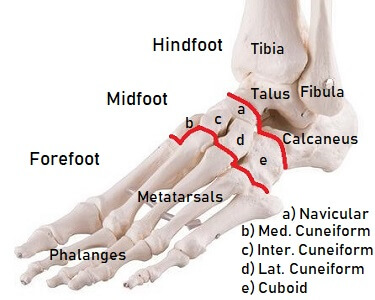 There are thirty three foot bones in humans making the foot and ankle a complex structure.

The bones are arranged to be strong, stable and yet flexible enough for movement.

The foot itself can be divided into three sections: the hindfoot, midfoot and forefoot and the foot bones can be grouped into three sets: the tarsal bones, the metatarsals and the phalanges.

The most common problems affecting the foot and ankle bones are fractures (breaks in the bone), abnormal positioning (e.g. flat feet) and excessive bone growth (e.g. bunions and bone spurs).

Here, you can find out all about the different foot and ankle bones. We will look at how they fit together to provide an efficient way for us to move and what commonly goes wrong with them.

The hind foot is the area at the back of the foot, comprising of the two shin bones and two tarsal bones.

There are two joints in the hindfoot, the:

The four foot bones in the hindfoot are the: 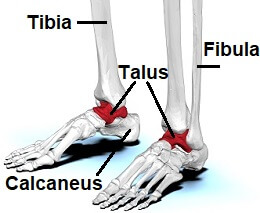 The tibia is the long bone at the front of the shin that runs down from the knee.  It forms the top and inner side of the ankle joint where it meets the talus bone of the foot.

Towards the bottom of the tibia, the bone expands outwards forming the medial malleolus, the prominent part on the inner side of your ankle.

The calcaneus is more commonly known as the heel bone. It is the largest of the foot bones and has a quadrangular shape. The calcaneus is the most commonly fractured tarsal bone, usually from a high fall. The achilles tendon attaches here linking the calf muscles to the back of the heel.

The midfoot is made up of five further tarsal bones. These foot bones sit together to form the main shape of the foot, the foot arches. The bones in the midfoot are the: 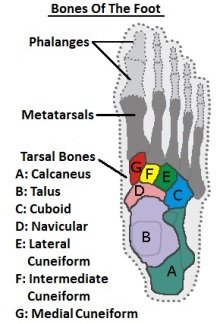 The cuboid foot bone is found on the outer side of the foot.  At the back, it links to the heel bone, known as the calcaneocuboid joint.

On the medial side the cuboid bone articulates with the navicular and third cuneiform on the medial side. At the front it forms the lateral link between the tarsal and metatarsal foot bones, known as the tarsometatarsal joints.

There are three cuneiform bones:

The cuneiform bones form the medial tarsometatarsal joints linking the tarsal bones to the metatarsals. They also all link to the navicular posteriorly (at the back) and the lateral cuneiform articulates with the cuboid bone.

The forefoot is made up of the five long metatarsal bones and the fourteen small toe bones known as the phalanges.

The five metatarsals are the long bones that link the tarsal bones to the toes, seen in yellow in the diagram below.  They are numbered from one to five, starting from the medial (inner) side of the foot. 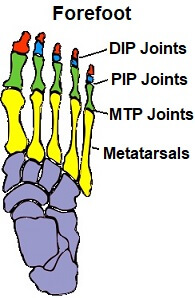 The phalanges are the small foot bones that make up the toes. The big toe is made up of two phalanges, whilst the other four toes, known as the lesser toes, and each made up of three phalanges:

Common Problems in the Foot Bones

The most common problems affecting the foot bones are injury and stiffness which can changes the position of the joints: