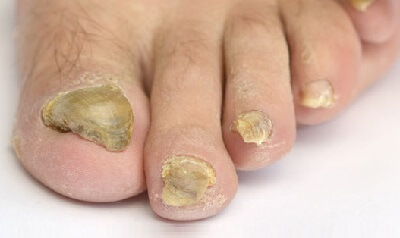 Thick toenails are a common problem, particularly in the elderly population.

It can be tempting to ignore them, hoping that they will get better on their own, but they are usually an indication of an underlying problem that needs some intervention.

Thick toenails respond well to treatment, but the earlier it is started the better otherwise the nails can become extremely brittle.

The two most common causes of thickened toenails are fungal infections and a medical condition called psoriasis, so we will start by having an in-depth look at both of those, including the symptoms, diagnosis and treatment options for each one.

We will then go on to look at some of the other possible causes such as aging, injury, Paronychia, Yellow Nail Syndrome, Rams Horn and Diabetes and how to tell which one you have.

If discoloration is more of a problem than thickening in your toenails, visit the Yellow Toenails section.

Fungal nail infections are the most common cause of thick toenails, accounting for almost half of all nail-related problems. Around 10% of the population of the States suffer from toenail fungus infections.

Fungal infections typically affect the toenails but can in some instances affect the fingernails as well. The medical term for a fungal nail infection is onychomycosis or tinea unguium. 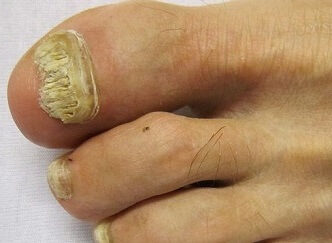 Fungal nail infections usually develop first on the edge of the nail and gradually spread to the middle of the nail.

Thickened toenails from fungal infections become more brittle as they thicken and small pieces may crumble or break off.

As the toenail fungus infection gets worse, pain and swelling may develop in the skin underneath and around the nail. The nail may lift up from the nail bed and there may be an unpleasant odor due to the infection.

Thick toenails from onychomycosis are usually due to Dermatophytes (most common in temperate western countries), Candida or Non Dermatophytic Molds (most commonly affecting people who live in hot, humid climates).

It is normal to have microscopic fungi on your skin but sometimes this can lead to infection. Thickened toenail fungus infections are typically caused by:

Toenail fungus infections can be highly contagious so it is important to take steps to prevent spreading the infection by keeping your feet clean, dry and covered. 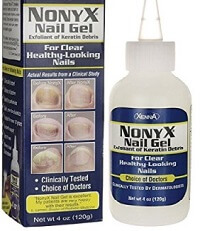 Treatment for thick toenails from fungal infections may include:

Some cases of thick toenails from fungal infections can be left to heal naturally without any treatment, simply by following good foot hygiene methods. Your doctor may take a swab from under your nail or a toenail clipping and send it off for analysis to confirm the type of fungal infection before starting you on medication.

Psoriasis is a common skin condition that can also affect the nails, leading to thick nails with areas of pitting, ridging, or abnormal contour. Psoriasis of the nails is accompanied by skin psoriasis in approximately 95% of cases, with the classic feature of patches of red, crusty, flaky skin covered with silvery scales, typically on the elbows, knees and scalp and trunk.

Psoriasis is thought to be caused by a problem with the immune system which causes an increase in the production of skin cells.

Typical symptoms of thickened toenails caused by Psoriasis include: 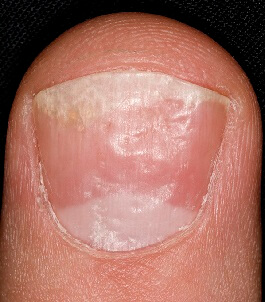 The best options for treating thick toenails from psorasis are:

Psoriasis is not contagious so you don’t need to worry about passing on an infection from thick toenails if they are caused by psoriasis, unless there is an accompanying fungal infection.

Other Causes of Thick Toenails

There are a number of other things that can cause thick toenails such as: 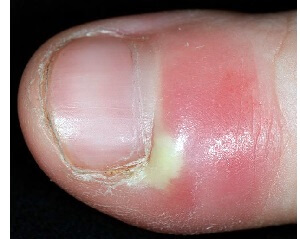 Paronychia is a nail disease caused by a bacterial infection at the side or base of the nail. It may develop suddenly or gradually.

With Paronychia, the skin around the nail is usually red, inflamed, hot and painful and there is gradual thickening and discoloration of the nails and pus around the nail.

Paronychia can affect the fingernails or toenails.

Foot problems are common in people with type 2 diabetes due to the poor circulation and nerve damage associated with the condition. The nails do not receive the necessary nutrients to grow properly which can lead to blackened, thickened toenails.

Good foot care is vital for anyone who suffers from Diabetes and if you notice anything unusual, even if it seems fairly minor, you should seek medical advice immediately. 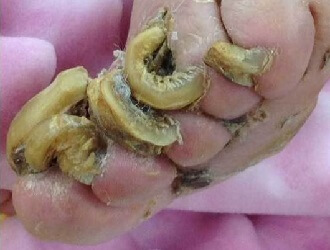 Ram’s Horn, aka onychogryphosis, is a condition most commonly seen in the elderly.

With onychogryphosis, overgrowth of the toenails leads to discoloured, deformed (typically curved), thickened toenails that gradually curl to resemble a ram’s horn.

Thick toenails from Ram's Horn typically develop due to cell damage from wearing tight, ill-fitting shoes, decreased blood supply to the nail, trauma/injury (such as dropping something heavy on the foot), infection, poor foot hygiene and failure to regularly trim the toenails.

Onychogryphosis usually need to be treated by a podiatrist as the nails become too thick to cut with conventional scissors or clippers. The nail may need removing altogether using the chemical phenol or a carbon dioxide laser.

Repetitive minor trauma or pressure on the nail can result in thickened toenails. This commonly affects athletes and runners or people who wear tight, ill-fitting shoes. Alternatively, a more major injury, such as stubbing your toe or dropping a heavy object onto the toe can lead to thick toenails, particularly if the nail bed is damaged. 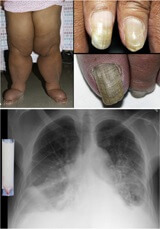 There may be accompanying swelling in the arms and legs (lymphedema), as well as respiratory problems such as bronchiectasis, persistent coughing and pleural effusion (fluid build-up around the lungs).

As we get older, nails grow slower but this can lead them to thickening due to the piling up of nail cells, known as onychocytes. Repeated pressure on the feet and reduced circulation can also lead to thick toenails in the ageing population.

Here we have look at the most common causes of thick toenails. Whilst it can be tempting to ignore the problem, prompt medical advice should be sought to discover the underlying cause and to prevent the condition from deteriorating further.

If pain in your toes is more of a problem, visit the Toe Pain section to find out what might be going on. And if you have more of a concern about discolored toe nails than thick toenails, visit the Yellow Toenails section. 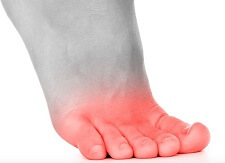