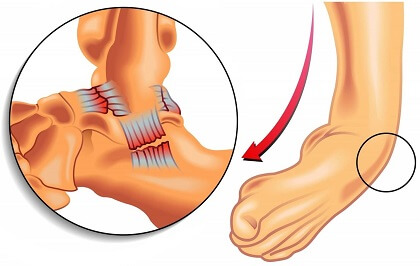 A twisted ankle can lead to the overstretching and tearing of one the ligaments around the ankle joint, known as an ankle sprain.

Approximately 25,000 people sprain their ankle every day so if you have, you are in good company.

The group not to join is the thirty five percent of people will go on to re-sprain their ankle, often because they don’t rehab fully after the initial injury.

Here we will look at the causes, symptoms and diagnosis of the different types of ankle sprain and then go on to look at the treatment options for a twisted ankle.  We will also look at some of the longer term problems associated with an ankle sprain.

Common Causes of a Twisted Ankle

Ligament sprains from a twisted ankle usually occur due to: 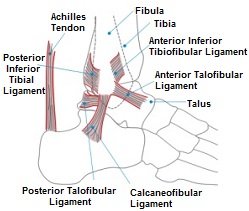 The ankle joint is surrounded by a number of ligaments.  Ligaments are strong, fibrous tissues which hold bones together, providing stability and support.

If the ankle twists suddenly forcing the foot to move outside its normal range of motion, extra stress is placed on the ligaments.  If the force is great enough with a twisted ankle and the ligament is stretched beyond its normal elastic limit, it starts to tear.

Torn ankle ligaments most commonly occur in those under the age of thirty and are equally prevalent in men and women.

Nearly half of all twisted ankles occur during sporting activities, most commonly basketball, tennis, football and soccer, especially with sudden shifting movements, but they can also happen during day to day life such as stepping off a curb. The severity of the ligament tear will depend on the severity of the twisted ankle.

People usually feel immediate pain with a twisted ankle if it is severe enough to have sprained the ligaments. There are three grades of ankle sprain and symptoms will vary depending on the severity of the twisted ankle:

This is when there is mild damage to one of the ankle ligaments, usually with less than ten percent of the fibres being affected.  There will be mild pain with ankle movements and the ankle may be tender to touch.  There may be some swelling and bruising, but no associated instability.  People can usually walk normally following a grade 1 ankle sprain. 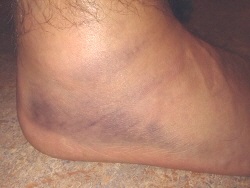 With a grade 2 ankle sprain there is moderate damage to the ligament results in a partial tear. There is usually immediate pain with significant swelling and bruising at the time of injury due to bleeding.  It may be difficult to walk and the ankle may feel slightly unstable. Ankle movements are often limited.

With a severe ankle sprain, the ligament tears completely, known as a rupture.  There may be a “popping” sounds at the time of the injury and there will be significant pain, swelling and bruising around the ankle and often down into the foot.  Walking on the foot is often impossible and the ankle may feel unstable and like it is going to give-way.

To fully understand how best to treat an sprain, it is important to understand what type of sprain it is.  A rolled ankle can cause three different types of ankle sprain, depending on the direction of the injury. 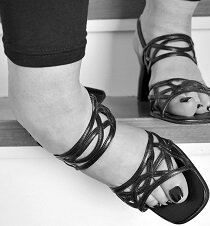 This is by far the most common type of ankle sprain, accounting for approximately eighty five percent of all ankle sprains.  In this case, the twisted ankle occurs when the foot rolls inwards as the ankle rolls outwards known as an inversion injury.

This type of ankle sprain is when the foot twists outwards too far, which is much less common than an inversion injury.  It affects the deltoid ligament (aka medial ligament) on the inner side of the foot resulting in medial foot pain.

The deltoid ligament is extremely strong and often with an eversion injury, part of the bone is pulled off by the ligament rather than the ligament tearing.  This is known as an avulsion fracture.

A high ankle sprain refers to an injury to the syndesmotic ligaments above the ankle joint that connect the two shin bones, the tibia and fibula.  They occur when the lower leg and foot twist outwards.

Your doctor will examine your foot and ask about how you twisted your ankle.  They may order x-rays or an MRI to look at the bones.

In severe cases, an ankle sprain can be accompanied by a fracture, or the ligament may have pulled off part of the bone where it usually attaches.

Your doctor will move the ankle in different directions and test the different ligaments around the ankle to determine which one you have damaged and whether it is a severe ankle sprain or simply a mild twisted ankle.

How Do You Treat A Twisted Ankle? 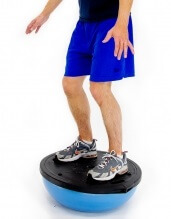 The main aims of treatment with a twisted ankle are to:

Treatment for ankle sprains will vary depending on the severity of your twisted ankle and may include a combination of:

In the ankle sprain treatment section we look at all the different treatment options as well as how to reduce the risk of recurrent ankle sprains.

Thirty five percent of people who suffer from a twisted ankle have recurrent problems, making effective ankle sprain treatment vital. Without it, you can be left with persistent pain and instability, increasing the risk of recurrent ankle sprains.

Recurrent problems after a twisted ankle are usually due to reduced strength, proprioception and joint stiffness. To find out more, visit the ankle sprain treatment page, including ways to avoid recurrent problems.

In almost seven percent of cases of inversion sprains, people also suffer from a condition called Cuboid Syndrome where one of the small bones in the foot partially dislocates. Often misdiagnosed, anyone with persistent pain following an ankle sprain or twisted ankle should be examined for Cuboid Syndrome.

In the ankle sprain treatment section, we will look at the best treatment options for different grades of ankle sprain.  We will also look at how to prevent further injuries often associated with a twisted ankle.

If this isn't sounding quite like your problem, visit the foot pain diagnosis section for loads of help so you can work out what is wrong with your foot. 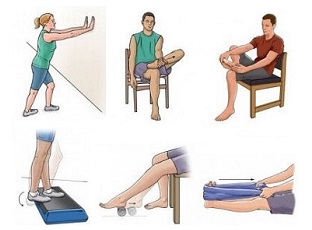 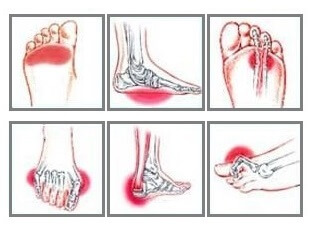